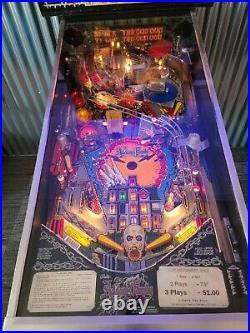 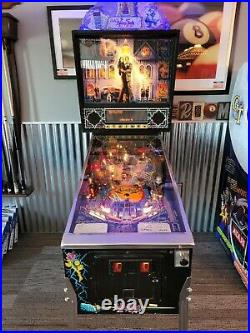 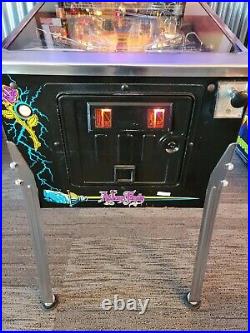 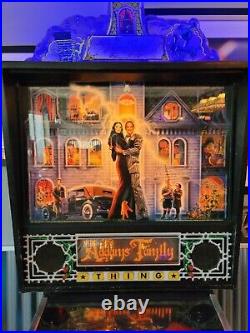 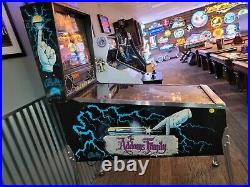 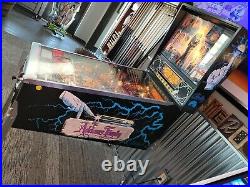 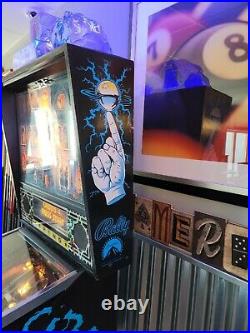 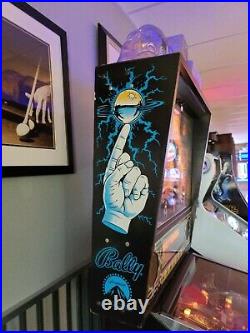 Original Adams Family Pinball Machine. This machine has been gone through with a minor restoration. Everything is cleaned up and in working order. All new rubber bumbers. New lights, New coin holder. Play field is in great condition. Topper is new with lights added on. Machine included original owners guide and documentation. Extra parts included as well. Machine released in March, 1992 by WMS industries. It was designed by. It was based on the 1991. Film of the same name. And features custom speech (mostly derived from the motion picture) by the stars of the film. The machine’s game card describes the game objective as being to Explore the strange world of the Addams Family. With that in mind there is no single player goal, though there are two central objectives. Tour the Mansion : The Addams Family mansion is located in the center of the playfield and has 12 rooms, each of which offers a different award. Once every award is collected, a “wizard mode” called Tour the Mansion becomes available (see below). Vault Multiball : In the top-right section of the playfield is a blue bookcase, representing the bookcase that Gomez. In the movie, hiding the entrance to the family vault. Hits to the bookcase award letters in the word GREED; once the word is completed, the bookcase turns to expose the vault entrance. A shot to the vault locks the ball for future multiball play, or starts multiball if two balls have been previously locked. The bookcase opens for certain other modes of play as well. If a ball enters the vault while the bookcase is still closed, it immediately opens and the player is credited with locking the ball. Other lesser objectives include. Bear Kicks : a ramp in the top center of the playfield awards “bear kicks” (referencing the movie scene in which a bearskin rug comes to life), awarding points or mansion rooms and lighting extra balls. Under certain circumstances, a shot to this ramp triggers Thing Flips , in which the machine takes control of the upper left flipper and tries to shoot the ball into the Swamp sinkhole at center right for extra points. Staircase Ramp : a left-side ramp that awards an increasing number of millions, starting at 1 million on each new ball, and letters in the word “THING” (see THING below). Graveyard : a set of five bumpers that increases the Graveyard Value, which is collected from the Swamp. Train Wreck : a dead-end shot in the top-left section that awards points, assists graveyard scoring, and lights extra balls. GRAVE : Five targets strewn around the field that award letters in the word “Grave”, which when completed award an increasing amount of millions. THING : Once the word THING is completed (see Staircase Ramp above), a scoop in the top center awards bonus points. Skill Shot : When initially launching the ball, dropping it into the saucer in front of Thing. S box just past the launch ramp awards points, starting at 2 million and increasing by 1 million per successful shot to a maximum of 5 million. A successful skill shot also collects any other benefits or awards currently lit at Thing’s scoop e. Extra ball, Quick Multiball, THING award, locking a ball for multiball. An electric chair is positioned above a sinkhole at the center of the playfield. At the beginning of each ball, it is lit and will award the currently flashing mansion room (rotated by the bumpers) if hit. The player must then shoot either ramp to relight the chair. The Swamp kickout hole will also award the flashing room if it is shot while the chair is lit. Mounted beneath the central portion of the playfield is “The Power, ” a set of spinning magnets that can alter the path of the ball. Flashing lights in this area indicate when the Power is active. The item “Adams Family Pinball Machine” is in sale since Monday, June 28, 2021. This item is in the category “Collectibles\Arcade, Jukeboxes & Pinball\Pinball\Machines”. The seller is “cavesllc” and is located in Bismarck, North Dakota. This item can be shipped to United States.