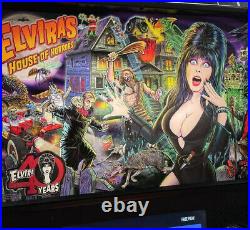 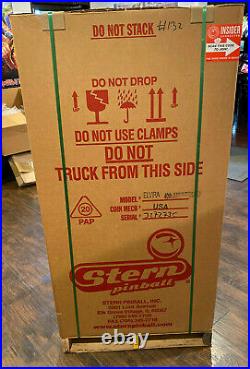 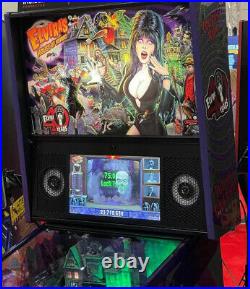 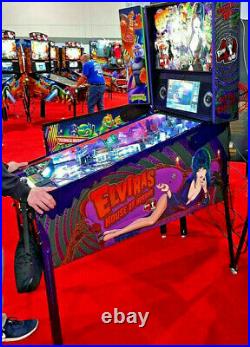 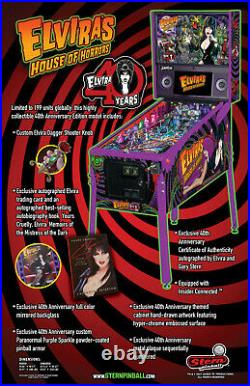 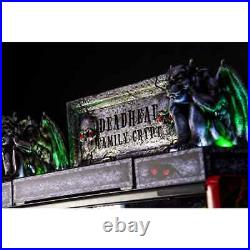 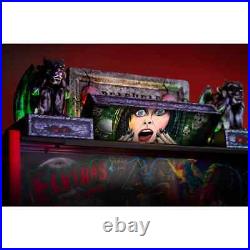 Stern ELVIRA’s House Of Horrors 40th Anniversary Edition [#132 0f 199] – pInball NIB (2021). > LAST CHANCE TO GET THIS NEW IN BOX (see photo #2 above). THIS PINBALL IS NOW IN STOCK – WE WILL BE PLACING IT ON LOCATION IF NOT BOUGHT! We have it, we can send it to you – NEW IN BOX! ONLY 199 of these exist! > – manufactured in the USA in 2021 by Stern pinball, Inc. I have also secured the impossible to find official Stern “Deadhead Family Crypt” topper for this game (pictured), and it is included as well! Anniversary Edition model includes a custom Elvira. Dagger Shooter Knob, an exclusive autographed Elvira. ” Yours Cruelly, Elvira: Memoirs of the Mistress of the Dark “. Accompanying each game is a 40. Anniversary Certificate of Authenticity, signed by Stern Chairman/CEO Gary Stern and, importantly, by Elvira herself. Anniversary Edition features an updated exclusive 40. Anniversary logo added to the full color mirrored Backglass. In addition, the game includes custom. Paranormal Purple Sparkle powder-coated pinball armor and legs, inside art blades, and 40. Anniversary themed cabinet artwork produced on a hyper-chrome embossed surface. Stern fitted this game with its upgraded audio system, anti-reflection pinball playfield glass, shaker motor, and a sequentially numbered 1 to 199 Anniversary metal plaque. The game is the persona of “FUN” with the third and campiest installment of the Elvira pinball trilogy! Trying to sell her mansion through “Alternate Realty”, Elvira’s house is haunted by the movie characters from her past. These ghouls, ghosts, monsters, and strange assortment of vintage characters with horrific acting skills seek revenge on Elvira while she and the player confront them, sending them back to the “film” from which they came! Elvira’s House of Horrors. Immerses players in a fun, campy, B-movie universe filled with all of the humor expected from the Mistress of the Dark including custom speech and, in a pinball first, exclusive filming of Elvira for custom video scenes utilized throughout the game! Machines are manufactured with Stern’s new Insider ConnectedT system installed. Each game is equipped with a QR code reader on the bottom arch enabling players to interact with the game and this new network in a variety of ways. Stern Insider Connected provides new entertainment and player engagement features and an operator focused tool set to drive location play and remotely manage every aspect of the machines. It was a pleasure to work directly with the Mistress of the Dark on this collaboration. We wanted to celebrate her 40. Milestone in fashion, said Gary Stern, Chairman and CEO of Stern Pinball, Inc. Anniversary House of Horrors. Pinball is a haunting fun time along with one-of-a-kind collectibles that will be treasured forever! This is the ULTIMATE ELVIRA. COLLECTIBLE, and it can be yours! You know it can’t be found, well here it is. Get it while you can because when it’s gone, it’s WAY Gone! This item is in the category “Collectibles\Arcade, Jukeboxes & Pinball\Pinball\Machines”. The seller is “pinballwizz” and is located in this country: US. This item can be shipped to United States.