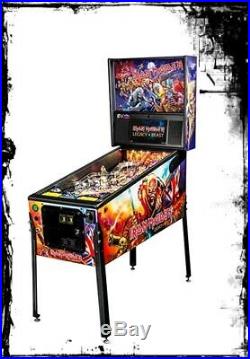 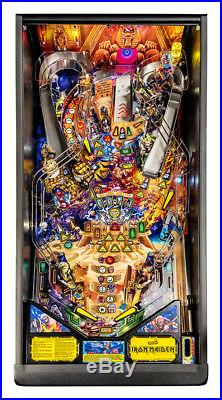 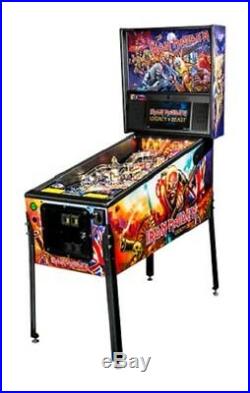 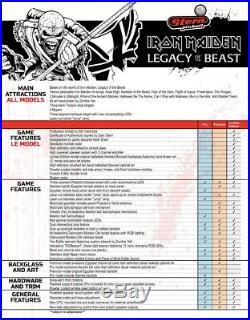 Formed in 1975, Iron Maiden led the wave of British heavy metal music and became a global institution. Over the course of 40 years the band has come to embody a spirit of fearless creative independence, ferocious dedication to fans, and a cheerful indifference to critics. Iron Maiden has built a following that reaches every culture, generation, and time zone. With over 90 million album sales, more than 2,000 live performances in 63 countries, tens of millions of fans and 16 studio albums of unerring quality, Iron Maiden has more than earned its proudly-held status as one of the most influential and revered bands of all time. The Iron Maiden pinball machines aim to reflect the same excitement, energy, and experience of a live Iron Maiden concert. Players will immerse themselves in an interactive Iron Maiden universe transforming into various forms of Eddie, the bands legendary mascot. Players, as Eddie, will embark on a quest to defeat the Beast and his minions across the Legacy of the Beast mobile game and comic book world. Iron Maiden pinball entertains with an amazing array of modern and classic features, making it suitable for all skill levels. Iron Maiden is one of the most iconic bands of all time and were excited to have Eddie join the ranks of Stern Pinballs rock and roll lineup, said Gary Stern, Chairman and CEO of Stern Pinball, Inc. The Pro, Premium, and Limited Edition models feature stunning and distinctive hand-drawn art by renowned illustrator and Iron Maiden fan Jeremy Packer, a. All models include twelve Iron Maiden songs. 2 Minutes to Midnight. Can I Play With Madness. Number of the Beast. Run to the Hills. Hallowed Be Thy Name. Rime of the Ancient Mariner. Fear of the Dark. On all models, players will go to battle as Eddie with the help of four flippers, two spinners, a set of 3-bank drop targets, metal and wireform ramps, a captive ball mechanism, a dual up-post lock mechanism, and a center bullseye target. The Premium and Limited Edition models also feature an interactive sarcophagus ball lock, a. Motorized secret tomb entrance, a controlled middle pharaoh laser-cut metal ramp that raises to. Reveal the underworld scoop, a dual sensing Newton ball, and two custom Eddie sculpts. The Limited Edition, limited to 500 units globally and in perpetuity, includes additional unique. Features such as an exclusive mirrored backglass and an upgraded sound system featuring an. Improved speaker cabinet and high quality JBL branded backbox speakers. Complementing the immersive theme and exciting gameplay experience, Stern Pinballs. Powerful SPIKE electronics hardware system enables high-definition graphics and innovative. Animations on the high-definition video display. SPIKE reduces system complexity and. Energy usage resulting in enhanced reliability and simplified servicing. Electronic system also powers a high-fidelity 3-channel audio system that is three times more. Powerful than audio systems of previous generations. Manufacturers Suggested Retail Price. Iron Maiden pinball is available through authorized Stern Pinball distributors and dealers around. About Stern Pinball, Inc. Is a global lifestyle brand based on the iconic and outrageously fun modern. American game of pinball. Headquartered minutes from Chicagos OHare International Airport. In the heart of North America, the company creates, designs, engineers, manufactures. Markets, and distributes a full line of technologically advanced terrestrial and digital pinball. Games, parts, accessories, and merchandise. The Company serves digital, consumer. Commercial, and corporate markets around the globe. Recent Stern Pinball titles include Guardians of the Galaxy, Star Wars, Aerosmith. Ghostbusters, KISS, Metallica, Game of Thrones, The Walking Dead, Star Trek, AC/DC. A broad range of players enjoy Stern Pinballs games from. Professional pinball players who compete in high-stakes international competitions around the. Globe to novice players who are discovering the allure of the silver ball for the first time. With over 90 million album sales, more than 2,000 live performances in 63 countries, millions of. Fans worldwide and 16 studio albums of unerring quality and power to their name, Iron Maiden. Have more than earned their proudly-held status as one of the most influential and revered. Bands of all time. Their recent world tour, 2016/17s The Book of Souls covered 39 countries. Across six continents playing to well over two million fans, with the band travelling on their. Customized Boeing 747 Jumbo Jet piloted by vocalist Bruce Dickinson. The band has recently. Extended its legacy in a couple of other areas of particular interest to them: their own beer. Trooper, widely acknowledged as the most successful international British beer launch of the. Past twenty years with Cheshire family brewers Robinsons and; a mobile game entitled Iron. Maiden: Legacy of the Beast — a free to play, fantasy RPG where players combat the legions of. Darkness across time and space as the bands mascot’Eddie’. The game is both inspired by. And features the art & music of Iron Maiden. A brand new album a live companion to The Book of Souls entitled Live Chapter was. Released globally on November 19th. All trademarks and product names are the property of their respective companies. Boxed dimensions: H:56″; W:31″; D:31; Weight: 285lbs. Unboxed Dimensions: H: 75 1/2 “, W: 27 “, D: 55 Weight: 250lb. At Classic Game Rooms we are dedicated to bringing you quality arcade and multicade parts at the lowest possible prices. Orders received before 1:00 P. Orders received after 1:00 P. Orders under 100 Lbs. Orders over 100 Lbs. If there is damage, it is your responsibility to have the carrier mark it when signing. Please message us at least 1 hour ahead so your order can be pulled and ready. M to 5:00 P. The item “Stern Iron Maiden Pro Pinball Machine FREE SHIPPING New Box SHIPS TODAY” is in sale since Thursday, May 30, 2019. This item is in the category “Collectibles\Arcade, Jukeboxes & Pinball\Pinball\Machines”. The seller is “classicgamerooms” and is located in Covington, Georgia. This item can be shipped to United States.