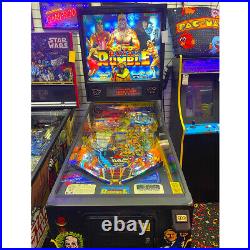 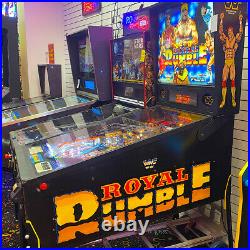 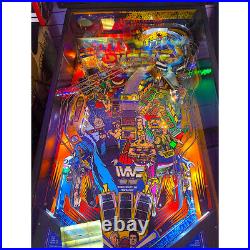 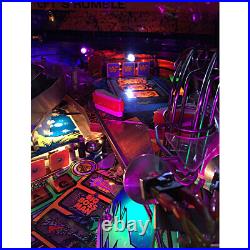 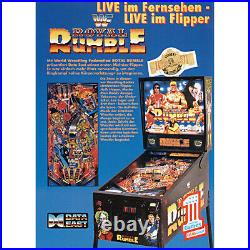 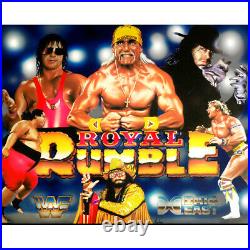 Royal Rumble Pinball Machine by Data East. The WWF Royal Rumble pinball machine was released by Data East in 1994 and is based on on the yearly WWF event held every January where thirty of the best superstars are invited to participate in a high-stakes, chaotic, over the top rope battle royal. Unlike traditional battle royals, the Royal Rumble introduces one superstar to the ring every two minutes, and they are charged with eliminating other competitors, friend or foe, by throwing them over the top rope to the arena floor. The last man standing in the ring after all thirty have entered, is declared the winner. Royal Rumble pinball was Data East’s first wide body table design, with the extra space needed to cage this match of pinball mayhem! This is a star-studded game with the likes of Hulk Hogan, Randy Savage, The Undertaker and Bret Hart dominating the main event. The crowd cheers at each wrestler’s entrance and the theme music of over a dozen wrestlers are featured. Hang onto every word of the custom speech track as the voice of WWF calls every move from the dreaded sleeper hold to a full Suplex and thrill as the wrestlers taunt, jeer and cajole your every move! RIP Jackpot – Raise the Undertaker and shoot for the coffin drop targets to get him into the ring for out of the natural world scoring. No-Hold Brawl – Video mode pits your wrestling skills one-on-one against the world’s finest wrestlers. Knock them to the mat and hit the tag button three times to pin and win! Royal Rumble – Complete the 9 grid features, shoot the capture holes and begin to rumble. Shoot the ramps from there and begin the 6-ball Royal Rumble! Go for The Championship Belt – Enter the ring and shoot the drops to win the Intercontinental, Tag Team and Heavyweight Belts! This item is in the category “Collectibles\Arcade, Jukeboxes & Pinball\Pinball\Machines”. The seller is “gameroomplanet” and is located in this country: US. This item can be shipped to United States.