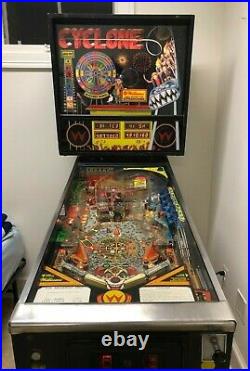 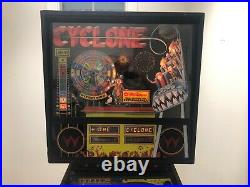 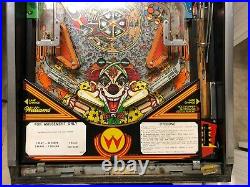 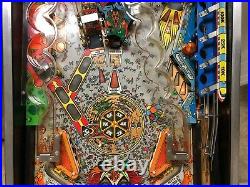 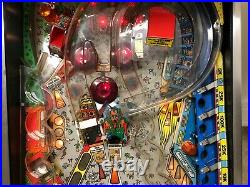 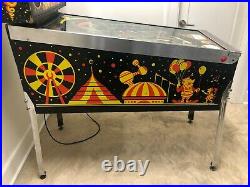 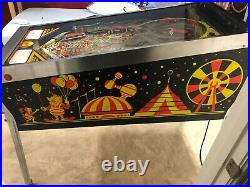 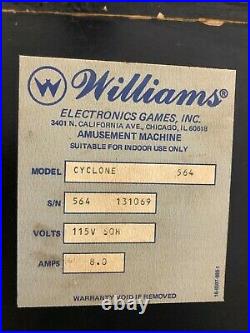 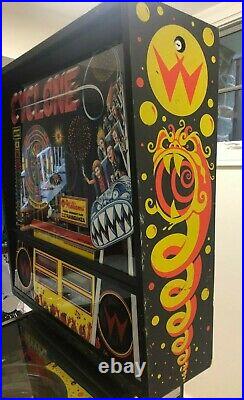 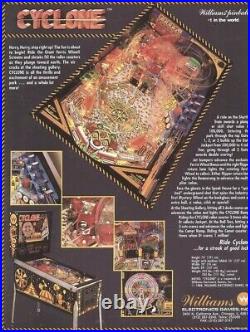 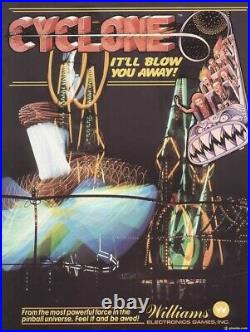 Williams Cyclone Pinball Machine – Vintage from 1988. Williams Cyclone Pinball – Vintage from 1988. It plays perfectly everything is working properly. The local pinball repairman (40+ years of experience) said this machine is easily an 8/10 and possibly a 9/10 based on condition. Full disclosure, one of the pop bumpers is not working – some board work is necessary to fully fix this problem. The repairman suggested letting this problem go until the board has other issues needing repair. Purist can have it fixed. Others will see no diminished enjoyment from this vintage pinball machine. I will work with shipper to carefully disassemble and load the machine. My wife has a different vision for our refinished basement and does not fully appreciate the entertainment value of a pinball machine. I have decided to sell this pinball machine. Cyclone is a pinball machine released by Williams Electronics in 1988. It features an amusement park theme and was advertised with the slogan It’ll blow you away! Cyclone was the 2nd machine from Williams after Comet depicting the Coney Island amusement park. The game has no multiball which is not typical for its era. The next sequel was Hurricane in1991. A revolving mystery wheel is placed in the backbox – ranging from Zilch to 200k, Extra Ball, and Special. A ferris wheel one on the playfield carries the ball for a portion of its rotation. The playfield features boomerang, comet, spook house, and cyclone shots. Images on the moving ferris wheel depict a young couple kiss as it turns. The art on the side of the backbox features an Asian type dragon and on the side of cabinet a carnival type design. Sound bites from the game were used in the song “Carousel” by the band Mr. Bungle on their self-titled album. Manufactured by: Williams Electronic Games, Inc. Generation: Williams System 11B. Release: 9,400 produced. Game Design: Barry Oursler. Mechanics: Joe Joos Jr. The Internet Pinball Database. The item “Williams Cyclone Pinball Machine Vintage from 1988″ is in sale since Thursday, November 5, 2020. This item is in the category “Collectibles\Arcade, Jukeboxes & Pinball\Pinball\Machines”. The seller is “helpmesimplifymylife” and is located in Washington, District Of Columbia. This item can be shipped to United States.